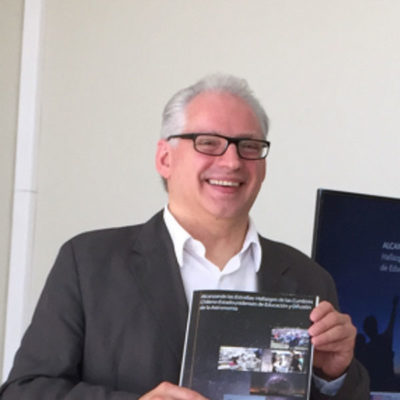 Tim Spuck, Associated Universities Inc. (AUI) Director of Education and Public Engagement – Tim has been a leader in astronomy education for more than 25 years. Prior to his role with AUI he taught astronomy and earth sciences at the high school and college levels, and served as K–12 Science Coordinator for Oil City Schools. He has led numerous professional development programs throughout the United States and abroad, and has developed a variety of astronomy experiences for learners of all ages. His students regularly engaged in authentic astronomy research, and have been recognized throughout the scientific community for their discoveries. Tim’s own contributions have been recognized through numerous awards including the American Institute of Aeronautics & Astronautics Educator Achievement Award, Tandy Technology Scholars Award, the Pennsylvania Christa McAuliffe Fellowship, and others. Tim also remains active within the amateur astronomy community, and has directed numerous outreach efforts, and led several small-scale observatory design and construction projects. He holds a doctorate degree in Curriculum & Instruction from West Virginia University, and a master’s degree in Science Education from Clarion University of PA. His recent publication Einstein Fellows: Best Practices in STEM Education was recognized as the 2014 Peter Lang Publishing Book of the Year. He currently serves as PI on three NSF supported projects including, Innovators Developing Accessible Tools for Astronomy, the Chile-US Astronomy Education Outreach Summit, and the Astronomy in Chile Educator Ambassadors Program.